There are many types of Pearls

There are many types or pearls each with a different significance. This post is as a result of the following question asked by one of our readers.

I am confused as to the many types or pearls and their significance, can you help me?

Pearls are created by oysters, mussels and clams. Natural pearls form when an irritant works its way into the shell. The creature secretes a fluid as a protection against this irritant. This 'nacre' is deposited in many layers, and the pearl is formed.

Originally they were completely natural. The pearl divers of the past were the stuff of legends – half-naked mermaid-like ladies who collected the oysters and their precious contents from the seabed. Or not so romantic men in canvas diving suits!

Stories about the rarity and value of early pearls abound – one of our favourites being that only royalty was allowed to have teardrop-shaped pearls. The portrait of Queen Elizabeth I with her elaborate hairstyle dripping in natural pearls is a testimony to the power and wealth of royalty.

Man has now intervened in the process – and because of this, pearls have become more plentiful and available to a broader buying public. Today we have access to a more varied offering of pearls.

A pearl is considered 'real' if it is formed by an oyster, mussel or clam even though it might have had the irritant introduced by man and is known as a cultured pearl. They are only "natural" if there has been no outside assistance.

The majority of pearls on offer today are in fact cultured – and those of top quality command keen prices.

The price of pearls is determined by a number of facts.

The most desirable pearl would:

All of these factors play a part – and the variations in each of these has an influence on the price. For example, an imperfectly shaped pearl which ticks all the other boxes can be more expensive than a perfectly round one which scores more poorly on the other aspects.

Given that you are dealing with a reputable supplier, you will get what you pay for when buying pearls. There is a pearl for every pocket – and one should buy the best one can afford.

Here is a quick list of the various types of pearls:

Primarily found in Japan and China. The classic pearl, renowned for their incredible lustre. The maximum size they grow to is 10mm in diameter and they are generally white or cream coloured with overtones of rose, silver or cream. 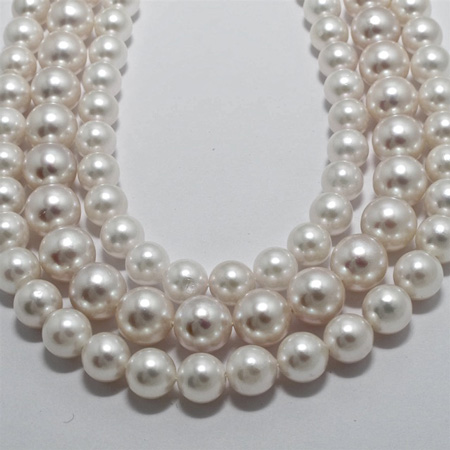 Akoya Pearls from 5 - 10mm in diameter

Today these are mostly farmed in China. They are the produce of mussels which live in freshwater lakes and also in aquaculture ponds. The shapes vary enormously. Tiny round "seedpearls", rice pearls (the first widely available freshwater pearls, popular in the 1970's, which look like Rice Crispies), rounds and baroque. Sizes vary from 1mm round pearls to very large Baroque shapes. 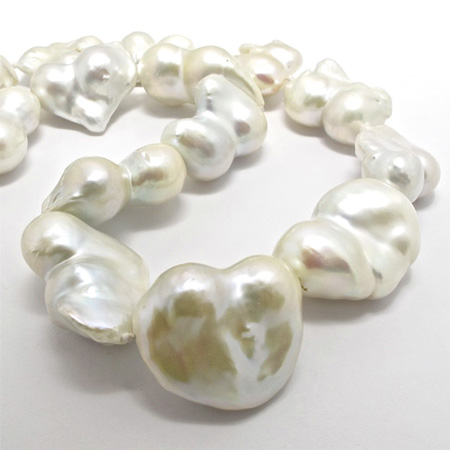 Also known as "the black pearl", this is formed from the black lipped oyster. The name is derived from the fact that they are primarily cultivated in the islands of French Polynesia around Tahiti. A true black Tahitian pearl is rare – most Tahitian pearls that come in shades of dark or silvery grey, with overtones of green. 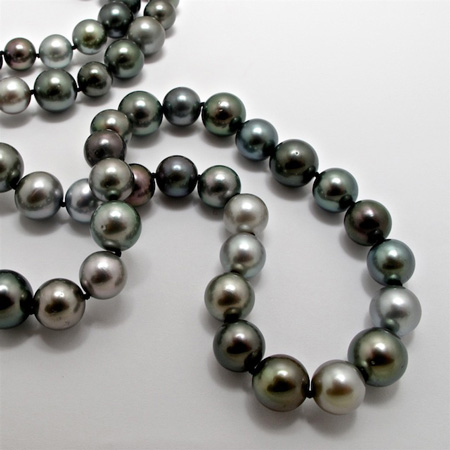 Tahitian Pearls - showing the shades of grey from light to dark

The ultimate pearl. Their large size, lengthy growing period and limited culturing area all contribute to their rarity – and the resulting high prices. Ranging in colour from optic white to a warm gold, with a luxurious lustre. Only a small percentage of South Seas are perfectly round and a matched full strand is rare and carries a high price. Ranging in size from 8mm to over 20mm in diameter, and occurring in round and baroque shapes. 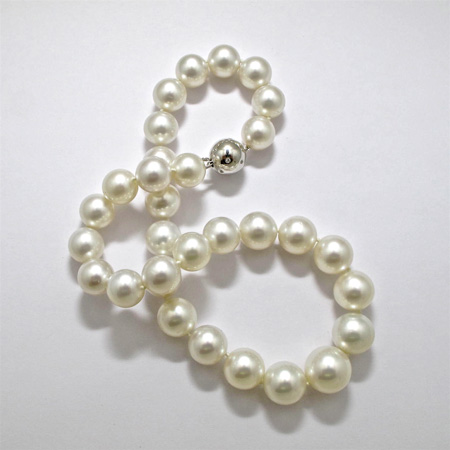 Buying pearls can be a complex business. It is best to ask your jeweller what type of pearls you are looking at. Any dealer should be able to give you comprehensive information as to what they are offering you.

Each piece of jewellery at VAJ is unique. The best way to enjoy the work of these talented South African artist-jewellers is to come and visit us in Rosebank (click here for directions).

We would love to see you, but if you can not, please fill in the form below.

I look forward to your visit.
Roni 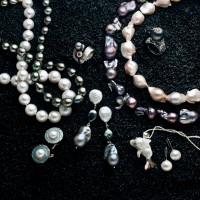 PEARLS…..one of Nature’s most enchanting gifts. The gem of choice for timeless beauty – endlessly versatile and flattering.

The Finishing touch for the Perfectly Groomed Man - a subtle personal statement and the ultimate secret weapon. The ideal gift to mark a special occasion. Perhaps to celebrate The Big Day? To... 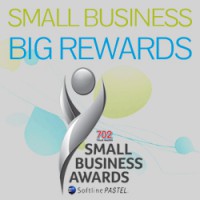 We are delighted to be a Finalist for the 2012 702 Small Business Awards.

The Finishing touch for the Perfectly Groomed Man - a subtle personal statement and the ultimate secret weapon. The ideal gift to mark a special occasion. Perhaps to celebrate The Big Day? To...